Tokyo, October 3, 2018 – Mitsubishi Motors' Eclipse Cross compact SUV has been selected as a recipient of the Good Design Award 2018 run by the Japan Institute of Design Promotion.

In selecting Eclipse Cross, the Good Design Award Committee rated its design highly, commenting: "The bold wedge profile is very striking. The character line that cuts sharply into the sides is distinctive, and one see the attention to detail in the styling that, on the one hand, locates the door handles on this line to create a unified look, while, on the other, horizontally divides the rear window to retain good visibility. We were also impressed with the way in which the design uses different cross-sections for the front and rear roof edges to create a coupe-like silhouette, while also providing the cabin space and comfort required in a SUV."

The Eclipse Cross is a fusion of sharp coupe looks and dynamic SUV mobility with signature Mitsubishi styling and performance. Other distinguishing features are: a design that motivates the driver to explore and enjoy new adventures; all-wheel control technology which delivers an enjoyable, reassuring feel that elevates the driving experience; and connectivity that inspires new fun adventures.

In its exterior design, Eclipse Cross creates a new coupe-form SUV look. Crafted around the high eye-point, ample ground clearance, and spacious cabin characteristic of the SUV genre, are lines that give it a wedge-shaped profile accented by the belt line and strong character line, a forward-rake rear window, a rear end with short overhang and vertical tailgate, and deeply flared, muscular fenders.

Note 1…Good Design Award has been the sole comprehensive design evaluation and commendation system in Japan since its founding in 1957 as the Good Design Product Selection System (or G Mark System). In the 60 years since, the movement has aimed at improving industry and enhancing the quality of life in Japan through design and over 45,000 G Mark awards have been made. Today, it has grown into a global design award with many companies and organizations from around the world participating in the movement's activities and the G Mark, the symbol of the award, is recognized widely as a mark of design excellence. 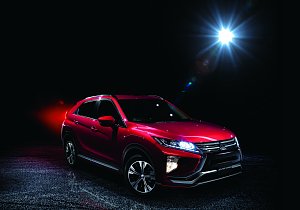 Mitsubishi Motors Corporation is a global automobile company based in Tokyo, Japan, which has a competitive edge in SUVs and pickup trucks, electric and plug-in hybrid vehicles. The company launched the i-MiEV – the first mass-produced electric vehicle in 2009, which was followed by the OUTLANDER PHEV in 2013 – a plug-in hybrid market leader in Japan and Europe. Mitsubishi Motors has 30,000 employees and a global footprint with production facilities in Japan, Thailand, China, Indonesia, Philippines and Russia. Models, such as the PAJERO SPORT/MONTERO SPORT, TRITON/L200 and OUTLANDER play a major role in achieving its growth. The global sales volume in fiscal year 2017 was 1,101,000 units, and the net sales of Mitsubishi Motors for fiscal year 2017 was 2.19 trillion yen. Mitsubishi Motors is listed on the Tokyo Stock Exchange.